Had a co-worker ask for some basic DAG setup instructions in Exchange 2013 so I wrote a quick little guide. This covers the high points around creating the DAG as well as configuring the DAG member NICs & networks.

Step 1 – Pre-Stage DAG Computer Account
Reference. When deploying a DAG on Exchange Servers running Server 2012 you need to pre-stage the DAG computer account. The above link points to the official TechNet article for doing this but here are the basics of it:

Step 2 – Configure DAG NIC’s
Reference. Exchange 2013 performs automatic DAG network configuration depending on how the NIC’s are configured. This means if the NIC’s are configured correctly then you should not have to manually collapse the DAG Networks post DAG Setup. Upon adding the nodes to the DAG, it looks for the following properties on the NICs & makes a decision based on them:

You want your MAPI/Public NICs to be top of the binding order in the OS & any Replication, Management, Backup, or iSCSI networks at the bottom of the binding order. This is a Core Windows Networking best practice as well as what the DAG looks for when trying to determine which NIC’s will be associated with the MAPI/Public DAG Networks.

The DAG also looks for the presence of a Default Gateway on the MAPI/DAG network NIC. Going along with another Windows Networking best practice, you should only have 1 Default Gateway configured in a Windows OS. If you have additional networks with different subnets on the DAG nodes then you would need to add static routes on each of the nodes using NETSH. More on this later.

Finally, NIC Properties>IPv4 Properties>Advanced>DNS>Register this connection’s addresses in DNS should be unchecked on all adapters except for the MAPI/Public NICs. This means all Replication, iSCSI, dedicated backup or management NICs should have this option unchecked. Again, this is a Windows Networking best practice but is vital for proper Automatic DAG Network Configuration in Exchange 2013.

Step 3 – Configure Routing if Needed (optional depending on DAG design)
If your DAG stretches subnets & you’re using dedicated Replication networks then they should be on their own subnet isolated from the MAPI/Public network. A common setup for a network such as this might be:

Now with the above configuration you would have some form of routing taking place between the two MAPI subnets. You would also have routing between the two Replication subnets. However, because you should only have 1 Default Gateway configured per server, DAG nodes in each site would be unable to communicate with each other over the Replication networks. This is where static routes come into play. You would run the following commands on the nodes to allow them to ping across to each other between the 10.0.1.x & 10.0.2.x networks (in the below example, REPL is the name of each node’s Replication NIC):

This is the preferred format for this command. There are some references to using the local interface IP instead of 0.0.0.0 but the format I use above is what is recommended by the Windows Networking Team. Reference.

“According to our Networking Development Groups, the recommendation actually is that on-link routes should be added with a 0.0.0.0 entry for the next hop, not with the local address (particularly because the local address might be deleted) and with the interface specified.”

This all assumes there is physical routing in place between the two subnets, like a Router, layer 3 Switch, or a shared virtual network in Hyper-V/ESX.

Verify connectivity between nodes over these 10.0.x.x networks using Tracert or Pathping. Note that these steps are only required if your DAG spans subnets & has replication networks in different subnets. While it technically should work, it is not recommended to stretch subnets for DAG Networks across the WAN.

It should also be noted that there should be no routing between the MAPI Networks & the Replication Networks. They should be on isolated networks that have no contact with each other. Also, Microsoft wants no greater than 500ms round trip latency between DAG nodes when you have DAG members across latent network connections. It’s important for customers to realize that you should not set your expectations around this number alone. You could easily have a connection over 500ms & not experience copy queues if you have only 20 mailboxes with low usage profiles. Alternatively, you could have a connection with only 50ms of round-trip latency but see high copy queues if you have thousands of high-usage mailboxes & a small bandwidth pipe. Just know that this number is not an end all be all.

Step 4 – Create DAG & Add Nodes
This part is pretty straightforward & you can use the EAC to do it. Just remember to give the DAG an IP address in every MAPI subnet where you have DAG nodes. So in our scenario above you would give the DAG 2 IP addresses; one in the 192.168.1.0 subnet & another in the 192.168.2.0 subnet.

Step 5 – Manually configure DAG Networks if needed
Reference. If you have dedicated management networks, dedicated backup networks, or iSCSI NIC’s then you would actually have to perform some manual steps after your DAG is setup. These networks should be ignored by the DAG & for cluster use. In order to do this we must first enable Manual DAG Network Configuration, which is disabled by default. We would then need to configure the iSCSI or similar network to be ignored by the cluster. Perform the following steps:

Finally, let’s validate everything. Run the below command:

When you add servers to a DAG it will create a network for every subnet\NIC that server is connected to, this is nice because as soon as you add the server it can replicate with the other nodes.
However there are some post configuration steps you need to take otherwise replication will occur over the MAPI\Client network and never use the replication network.

You should now be replicating over the replication network, you can verify with the following: 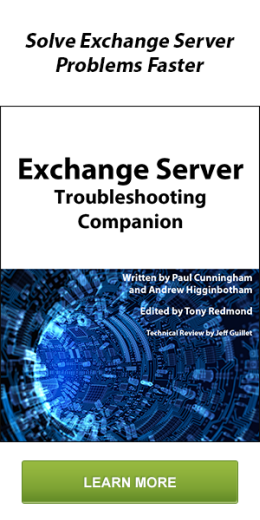 All information is provided "AS IS" with no warranties, and confer no rights, and as such you perform at your own risk.

NOTE: You should always make a backup of your server or export the registry before making any changes to it.